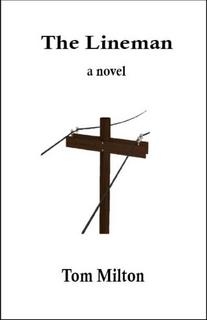 Danny O'Dwyer, who works as a lineman for the electric company, has an accident that makes him physically unable to continue working as a lineman. In losing this job, which he loves and has done for twenty-six years, he loses his identity and begins a downward trajectory that threatens to ruin his family despite the efforts of his wife Paola to help him and to save their marriage.

On the eighth floor she went to the nurses station and told a woman who was gazing at a computer screen: "I'm here to see a patient. His name is Danny O'Dwyer."

"I think he's still in surgery."

"Can you tell me what happened to him?"

"That gentleman can tell you," the nurse said, pointing to a man who was sitting in a plastic chair at the opposite side of the hall.

Joe was sitting with his head bowed as if he was praying.

"Joe?" she said, approaching him.

He looked up, blinking.

He lifted himself from the chair, saying: "Mrs. O'Dwyer, I'm so sorry."

"You can call me Paola. Tell me what happened."

He heaved his shoulders, taking a deep breath. "We were out on a job together. I was in the truck, and Danny was up in the bucket—"

Paola waited anxiously for him to continue.

"I was watching him, and all of a sudden the bucket tipped over and dumped him out."

"Where did he land?"

"He landed on the pavement. The impact was mostly on his right shoulder. But he also hit his head, and it knocked him out. I called EMS, and they came right away. I also called the office, which found another lineman to finish the job, and I drove the work crew manager's car here."

"Did you see him after they brought him here?"

"No, he went right into surgery. I'm waiting to hear from them."

"How long ago did he go into surgery?"

Joe checked his watch. "It's almost two hours ago."

"I'll be right back," she told him, turning. She went over to the nurses station and called to the woman she had talked with before. "Can you tell me anything about his condition?"

"I'm sorry. I can't. They took him directly from the ER to the OR, so all I know is, we were told to have a bed for him."

"Well, please let me know as soon as you hear anything."

"I will. If you want to, you can wait in the lounge at the end of the hall."

She went back to Joe and persuaded him to go to the lounge with her. As they walked down the hall she asked: "How could the bucket tip over?"

"Then there must have been something wrong with it."

"They're supposed to inspect it."

"If they didn't, then it's the company's fault."

She understood the implication. If it was simply an accident, there would be compensation, but if the company had been negligent, Danny could sue them for even more compensation. But she didn't care about compensation. She only wanted him to be all right.

The lounge had windows with a view of the river that included the George Washington Bridge and the skyline of Manhattan. There were several chairs and a coffee table with a scattering of random magazines. An old man who looked asleep was occupying one of the chairs, and the others were empty.

Paola and Joe sat down to wait. For a long time neither of them spoke, and in the silence Paola prayed. She didn't pray often, not wanting to bother God with minor problems but saving the recourse of prayer for occasions when she really needed help. And now, based on what she knew about the situation, she really needed help.

"How long have you been married?" Joe asked, interrupting the silence.

"We have one. She's fifteen." She had no idea how long Joe and Danny had worked together, but if they had been women, information about their husbands, kids, and parents would have been shared within a few hours.

"Does your daughter know what happened?"

"No. She's at school now. And I don't want to tell her until I know what happened."

"You know what happened. The bucket tipped over and dumped him out."

"I meant until I know how he is. I don't want to scare her."

They had fallen into another silence when a doctor appeared, still in his scrubs.

"Yeah," she said, bracing herself.

"Your husband's in the recovery room. The good news is, we managed to limit the damage to his nervous system, so he won't be paralyzed. But there's a lot of damage in his right shoulder and his right arm, so he'll need surgery later for that."

"He landed on his right shoulder," Joe said.

"You saw the accident?" the doctor asked him.

"Yeah. I saw it. He was in a cherry picker, and all of a sudden the bucket tipped over and dumped him out."

The doctor nodded. "Well, he's damn lucky. It didn't kill him, and it didn't leave him paralyzed. But he won't be able to work as a lineman anymore."

"When can I see him?" Paola asked.

"In an hour or so. We need to keep him in the recovery room for a while."

When the doctor had left she gave thanks for Danny not being killed or paralyzed, but she was concerned by the doctor's opinion that he wouldn't be able to work as a lineman anymore. And she prayed that the doctor was wrong.

As she waited for Danny to get out of the recovery room she called her parents' house. She didn't know if Briana would be at home or at a friend's house, and anyway she wanted to talk with her mother first, not only to get some moral support but also to get some guidance.

She related to her mother what Joe had told her, and what the doctor had told her, though she didn't repeat the doctor's opinion that Danny wouldn't be able to work as a lineman anymore. Her mother agreed with her decision not to call Briana until after she saw Danny and made her own assessment of things. She asked her mother to tell her father what had happened and to be available later to drive Briana to the hospital.

Though she wanted to put off telling his parents so that she would have some time alone with Danny before they got involved, she decided that it wouldn't be right to keep them in the dark, so she called his parents' house and talked with his mother, who agreed to tell his father and to wait until she heard back from Paola before they came to the hospital.

After making these calls she didn't have to wait much longer for Danny to be released from recovery and transferred to a room.

Joe went with her, and they found him in a room with two beds, one of them empty. He was propped up in a reclining position, still in a daze, though his drowsy eyes brightened with recognition of his wife and his coworker.

"How are you doing?" Paola asked him.

"Then you're zoned out," Joe said.

"I guess I am." He closed his eyes and opened them. "I was trying to remember exactly what happened."

"You were in the bucket, and it tipped over."

"It just tipped over?"

"Yeah, it did. And it dumped you out. You landed on the pavement."

Danny made a face as if he could imagine how that had felt. "Well, I must have landed on my shoulder."

"You did. You're lucky you didn't land on your head."

"I hit my head. I can tell from how it feels. But I must have pulled it out of the way."

While they were talking Paola moved around the bed so that she could take his left hand and hold it. His hand was cool, as if it had been in a refrigerator.

He turned his head to her. "Did the doctor tell you how I am?"

"He told us you won't be paralyzed," she said, "but you'll need more surgery for the damage to your shoulder and your arm."

"How bad is the damage?"

"It's bad enough so you'll need more surgery, but until they do it, they really won't know."

"Shit," Danny said, loading the word with emotion. "Did it have to be my right arm?"

"You could have been killed or paralyzed," she reminded him.

"You are lucky," Paola insisted. "And let's pray that with more surgery your shoulder and your arm will be fine."

"You do the praying," he told her.